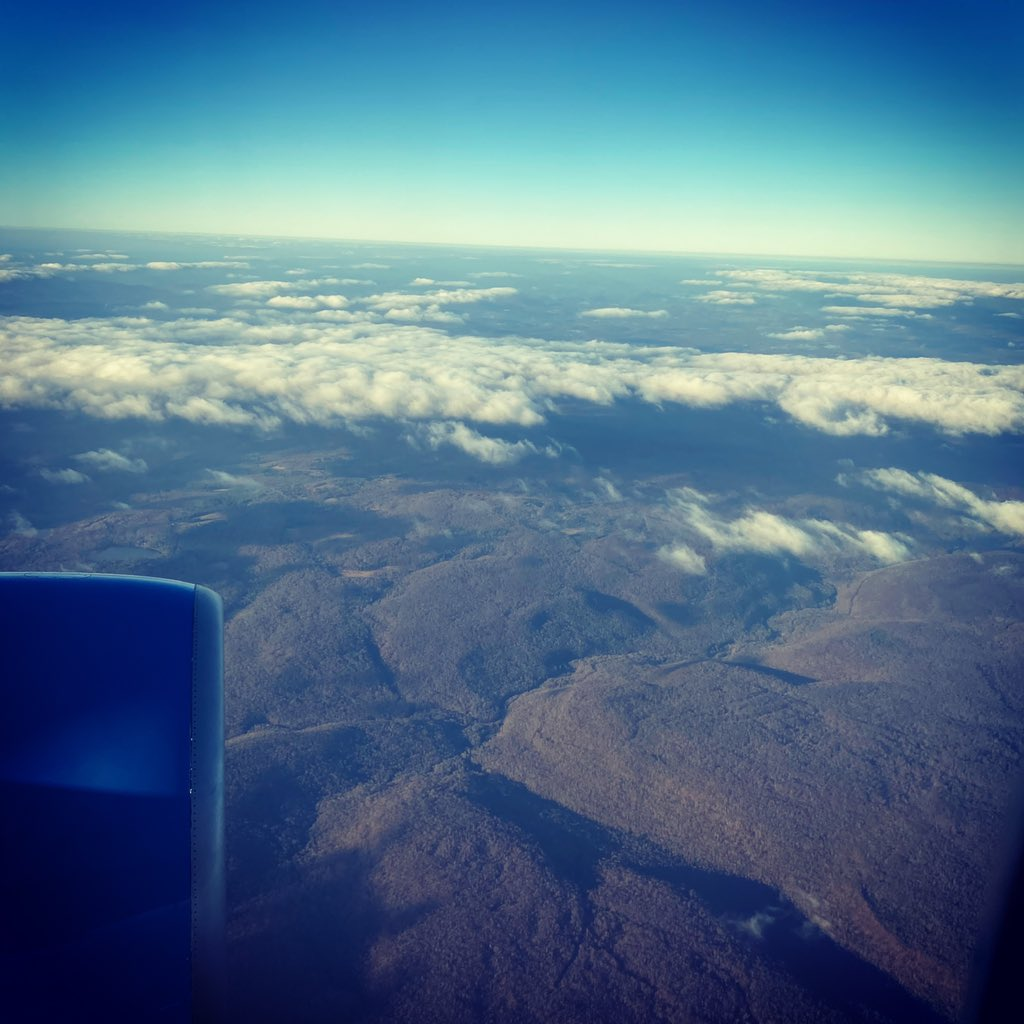 Politics is a dirty business. Mudslinging is common. It’s hard to figure out what’s true and what’s not. But one issue, another dirty business, is something that Christians in particular should know the truth about: abortion. And you know who should be pulling together to stump for a candidate who stands against the killing of our most vulnerable human beings? Our faith leaders. But instead, all we see are some of our most well-known faith leaders causing confusion and dissention.

In a recent article by John Piper, he stated that “boastfulness” is a bigger problem than abortion: “I think it is baffling and presumptuous to assume that pro-abortion policies kill more people than a culture-saturating, pro-self pride. When a leader models self-absorbed, self-exalting boastfulness, he models the most deadly behavior in the world.” …
…What a ridiculous comment from someone seen as a faith leader. And what a ridiculous justification to vote for a party that stands for the expansion of elective abortion through 40 weeks for any and every reason. Pathetic….
…We can’t legislate pride or boastfulness or arrogance. But we can legislate abortion. In fact, we can make it illegal. And that is what is on the line. Life is on the line. The innocent lives of precious babies are on the line. Not pride. Not arrogance.

In scripture, Christlikeness and masculinity/femininity are not in opposition to one another. They are complements. To pit them against one another is highly misleading…
…The underlying Greek verb (andrizesthei) is rendered variously as “act like men” (ESV, NASB; cf. CSB, KJV) or “be courageous” (NIV, NRSV, NLT). Some interpreters who favor “act like men” understand the text as a call to manhood. Others — like Byrd — dismiss that interpretation by noting that the command is addressed to both men and women.
For my part, I think either translation is acceptable. Both translations capture something true and important about the original expression. The Greek word in question is built on a root that refers to adult males (aner). That means that there are at least two semantic oppositions here, not one—male as opposed to female and adult as opposed to child. As Thiselton explains, “it does not simply pose a contrast with supposedly ‘feminine’ qualities; it also stands in contrast with childish ways.”[4] In other words, the root idea invokes both masculinity and maturity.
The term’s actual usage, however, is idiomatic and reflects the stereotypical connection between manliness and courage. It’s a call to bravery that relies on a trope about masculine strength that was common in the ancient world. This particular usage means roughly the same thing we mean when we say “be a man” or “man up.” It calls for readers to put away whatever inhibitions or fears they might have about doing something, and do it….
…But the call to courage is not the only thing going on with this term. The author, the Apostle Paul, has clearly chosen to use a stereotype that associates courage with masculinity. Why would Paul speak like that? Is he trying to say that men are supposed to be courageous but women aren’t? Of course not! This command is given to everyone in the congregation, both men and women. The call to courage is limited to neither male nor female but is required of both.
Nevertheless, the expression itself is a reflection of the way God designs men and women in their physical differences—that men are generally stronger than women and more mature than boys (1 Pet. 3:7). These characteristics make men fit for feats of courage and bravery. Of course not all men have great strength, but that is not the point of the stereotype. Stereotypes are generalizations, after all. And in this case the generalization reflects the Creator’s design. 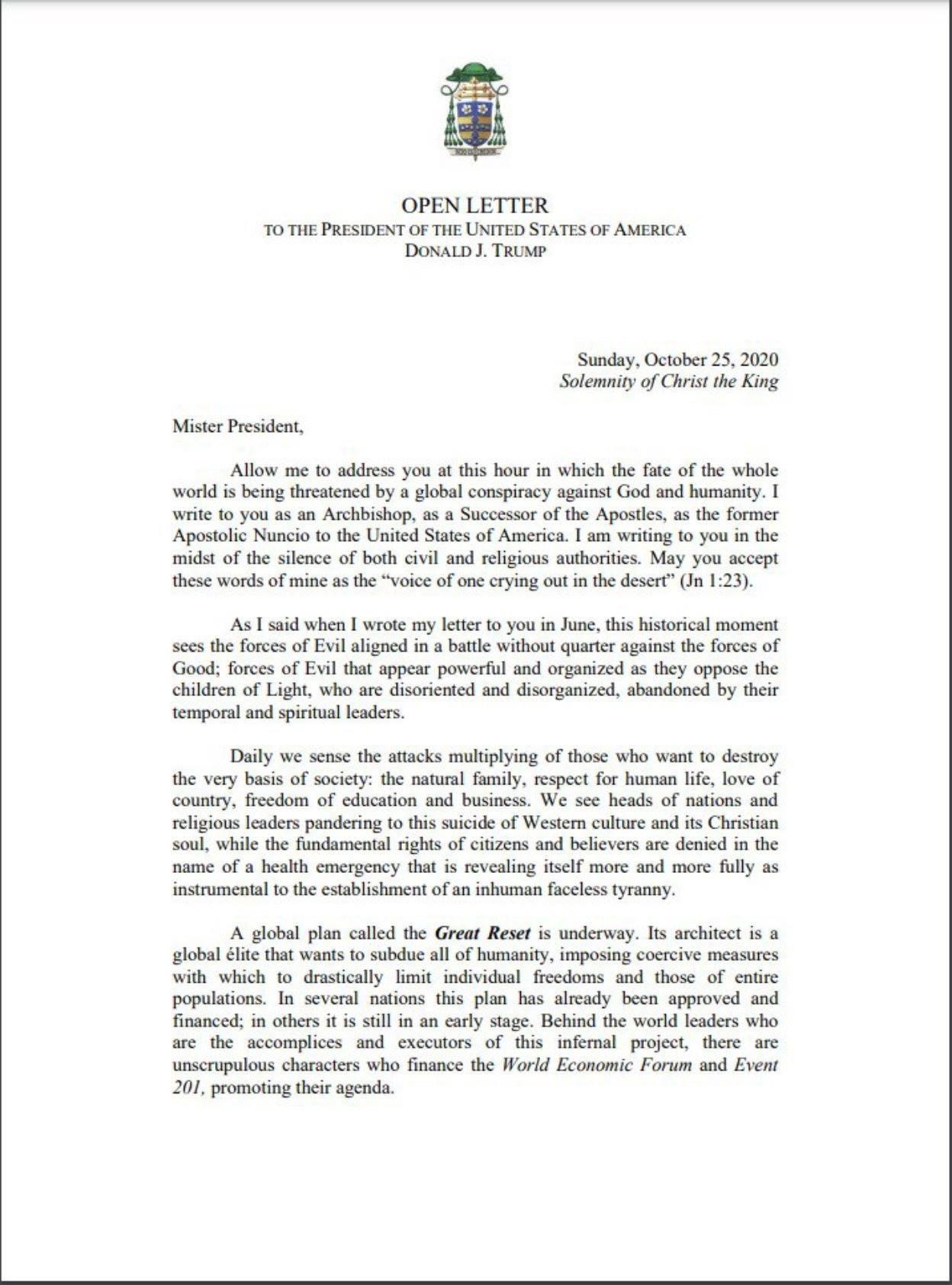 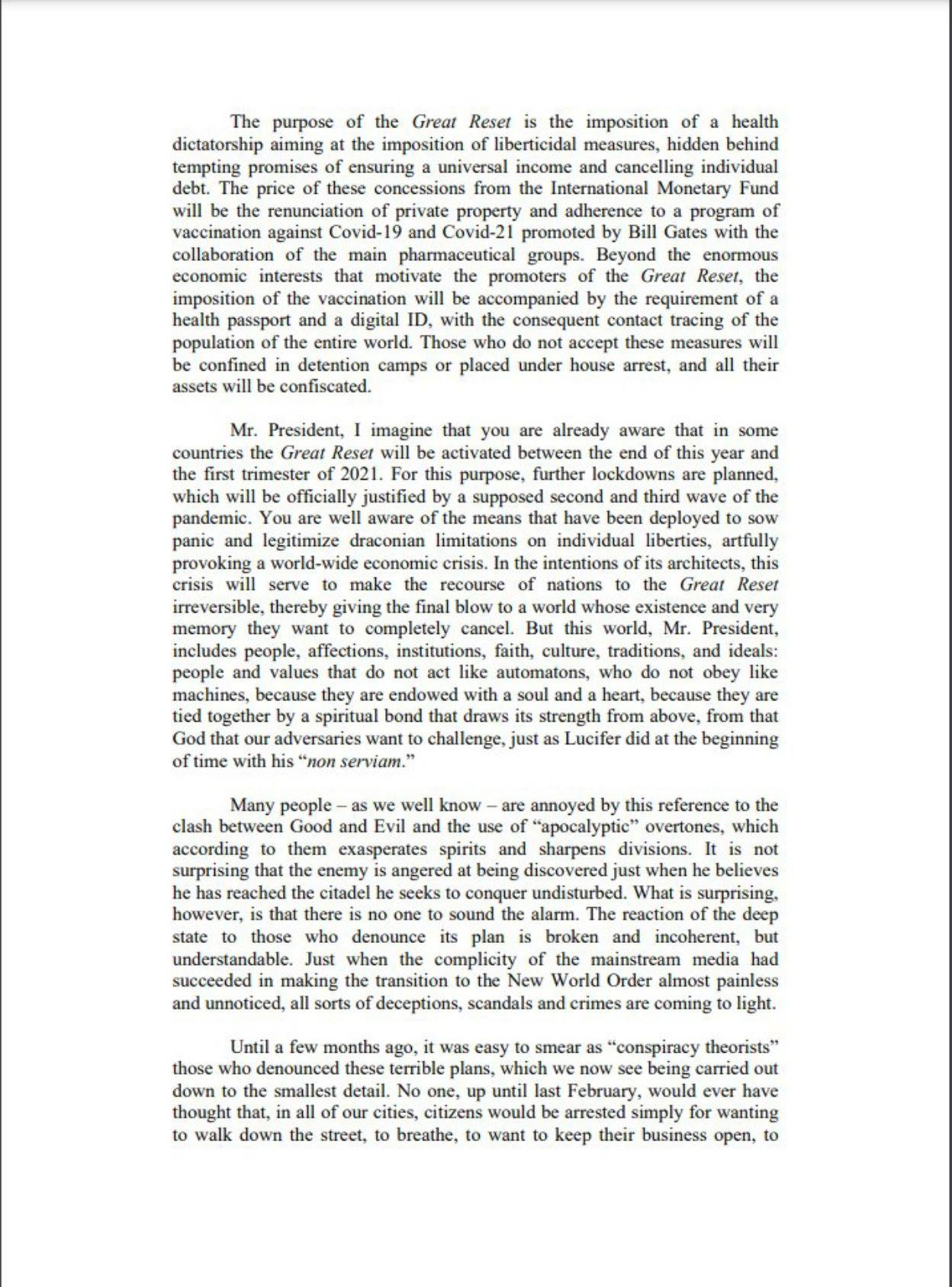 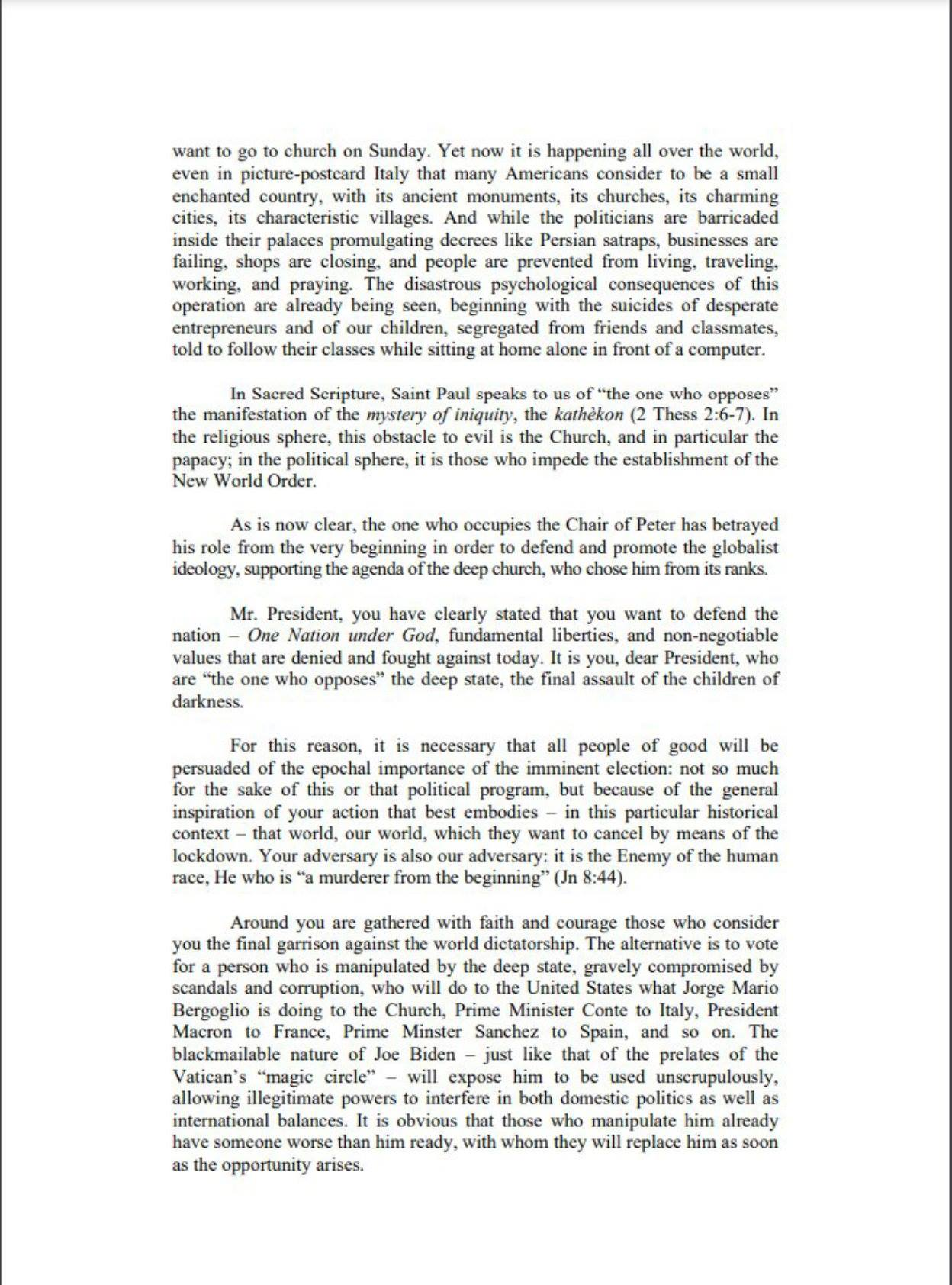 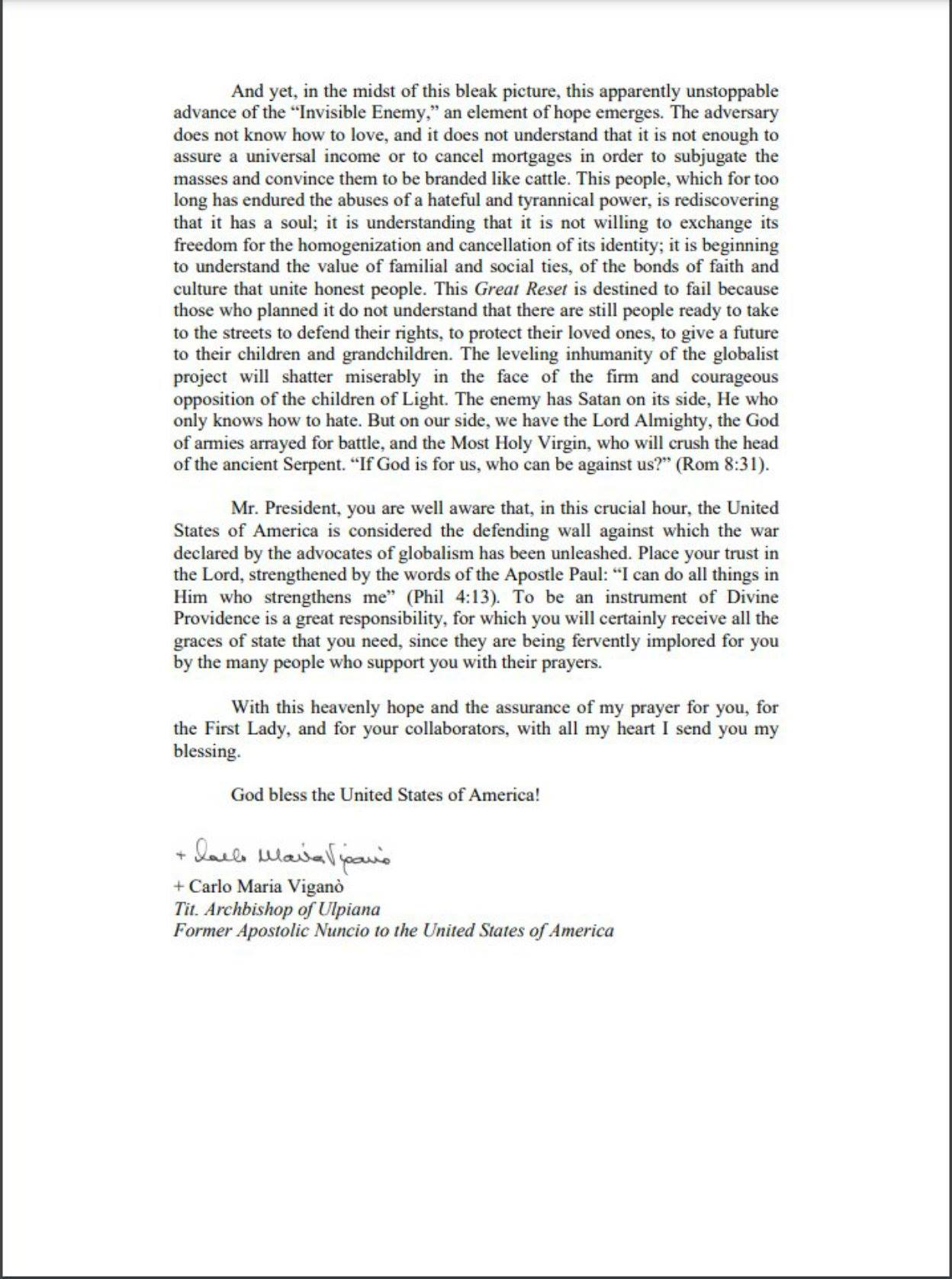 \”Archbishop Carlo Maria Viganò speaks out against the Deep State, the Deep Church and the Global Elite\’s plan to enslave humanity.\”
Transcript
The Real Netanyahu (and Trump) Dilemma
-Caroline Glick

The Nobel Peace Prize Committee’s decision to award the prize to the World Food Program this year assuaged the fears of elitists from New York to Paris and Berlin. The Abraham Accords, which include bilateral peace treaties between the United Arab Emirates, Bahrain, and most recently Sudan, and Israel have fundamentally changed the Middle East. They have upended fifty years of failed peace processing on the part of Western foreign policy elites who seem to fall into deeper and deeper funks with word of each new peace deal….
…The Nobel Committee’s decision to give the peace prize to the World Food Program rather than to Netanyahu, Trump, Bahrain’s King Hamad and the UAE’s Prince Mohammed bin Zayed Al Nahyan was a play for time. But even if Trump and Netanyahu are forced off the stage, the Abraham Accords will not go away. The peace that is bursting out from all quarters is real. It reflects the real desires of the people who live in the region. And it turns out their desires are far different from the sacrosanct anti-Israel catechisms taught and internalized by the peace processors of the West.
And this brings us to the real “Netanyahu Dilemma.” The real dilemma embittering the lives of the foreign policy elites is not whether to give the Nobel Peace Prize to men they hate. It is how to react to the peace these men have achieved.
For 50 years, the elites have insisted that ending the Arab-Israel conflict their greatest goal. Should them embrace and celebrate the peace that is now emerging? Or can they ignore it and continue condemning Israel, and so risk being exposed along with their false peace predicates as phonies and far worse.

Omertà is a lie- the lie of silence. It derives from a Sicilian word umiltà, which means humility- in the sense of subjecting one’s self to a code of secrecy and feigned ignorance. It is never practiced for honorable or decent reasons. It is the rock that ugly things are hidden under. It is a credo of gangsters and racketeers. Politics is never more than a few steps away from racketeering. When Omertà is in play there is a racket present – you can count on it. And Omertà is everywhere in our politics these days. Our public discourse is blocked and bloated with a constipating mass of subjects that are forbidden- The correctness Omertà. Every one of those unspeakable subjects is the marker of a racket that is protected by the silence…
… As I wrote, this happens on both sides of the political divide and that is the very reason that President Trump is hated and feared even by many in his own party. He is not of that ilk. He is much more than a “Public Servant”. He is an authentic individual who has no need to rig his position for “Self Service”. He has promised to exposed the racket that public service has become and he has made a fair start at it. He is not pretending to be bland and folksy while making out like a bandit as Joe Biden has done. He is not, like Kamala, a pampered daughter of College professors pretending to be a “down-with-it” African American who erupts in hollow laughter at nothing funny. Everything he says is open and sincere and thereby dangerous to the phony “servants” around him and their confected personae. He is the Omertà Buster.
He explodes media pretense with every thing he does. His advisors have been consistently wrong in advising him to change his style. He doesn’t care if you see the real Donald Trump because he is real- not servile. He has kept his promises. He has led us to a level of prosperity that others wanted us to believe was not possible. He is our best hope to get rid of the servile thieves that have come to infest our government and all of our public life- to end the Omertà.
Here is the ultimate irony – Trump, unlike Obama and Biden, is the Real Hope and Change. All hail the Omertà Buster.