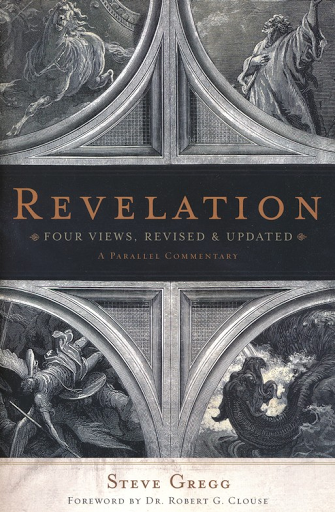 I got a copy of Steve Gregg\’s revised Revelation – Four Views.

I grew up (1st grade through high school) in a church that taught the futurist view, as a “given”.  I did not know that there was any other way to view the end times.  Hal Lindsey was a frequent guest speaker at our church, and my close non-believer friend’s dad was a business partner of Hal’s, who got me autographed copies of his books.

Later, (just like Steve Gregg) I learned that there were various views of the end times; held by Christians throughout history.  Something that should give any protestant Christian pause about believing that their view has to be the right one, and that other views are heretical or incorrect; is that most of the reformers held a view, the historical view, that almost no one holds today!

In the center are “absolutes”.

Next, there are “interpretations”.

Next and finally, there are “deductions”.

Eschatology is mostly an assortment of interpretations and deductions.  Not absolutes!
Notes from Four Views:

On page 46, Steve writes, that the most controversial issue in Revelation, has been the meaning of the “thousand years”, in chapter 20.  There has been an unsettled theological debate, between three views of the thousand year Millennium:
Some Christian luminaries, and groups, who embrace each approach:
Historical:
(Steve does not have a list that I could find, at least not at this point in the book, of preterist or partial-preterist teachers)
Here is a possible beginning list:
Partial-Preterist:
Futurist:
Idealist or eclectic approach (a very broad category, not self-identified as such, and usually a blend of one of the first three, with a nonlinear, poetic, overtly symbolic, allegorical, or spiritualizing interpretation of Revelation):
These words of Steve, starting on page 67, are why I wrote this post, and this is what I grew up with:

…every generation of futuristic interpreters for the last 150 years or longer has been able to gain confidence, by comparing their own times with the prophecies of Revelation, that they themselves were living in the time of fulfillment…(1)

I found Ladd to be an excellent first step, in questioning the futurist viewpoint:

…Not all futurists are dispensationalists and not all approve of engaging in what some refer to as “newspaper exegesis.”  There are notable futurist scholars who reject the dispensational distinctives… (Some examples are: Zhan, Mounce, and Ladd)
…They take Revelation less literally, and refer to dispensationalism and “extreme.”  They remain futurists, however, in that they anticipate a future Antichrist arising to persecute the saints in a future tribulation period, and they do anticipate a literal thousand-year reign of Christ on earth.

Here is the key thought from Steve, on why the futurist approach does not work (for me!!):

It is not surprising that the futurist approach, more than any of the others, has appealed to popular sentiments.  However, some biblical scholars have complained that futurism, like historicism, renders the book of Revelation about 90 percent irrelevant to the original readers, since, on this view, they lived nearly two thousand years prior to its fulfillment (despite the book’s repeated affirmations of the near fulfillment of the prophecies (Rev. 1:1 &3; 22:10)).  If we go along with dispensational interpreters in finding the Rapture of the church in Revelation 4:1, then the book becomes largely irrelevant, not only to the original readers, but to Christians of any age.  This is because the church will be in heaven before the majority of the prophecies begin to unfold, neither experiencing nor witnessing their fulfillment.  This leaves it far from obvious why Christians should take an interest in such events- or why God should wish to reveal them to us.