Therefore, be strong and valiant, for though Saul your lord is dead, the house of Judah has anointed me king over them.” 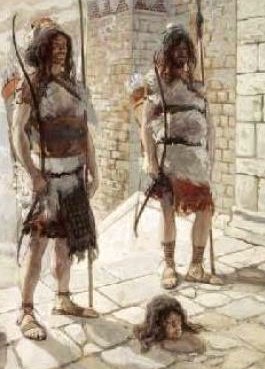 …He made him king over Gilead, Asher, Jezreel, Ephraim, Benjamin—over all Israel. Saul’s son Ish-bosheth was forty years old when he became king over Israel; he reigned for two years. The house of Judah, however, followed David.
-2 Sam. 2:7-10

Saul, then David were both selected by God.

But, after Saul died, a man named Abner selected Saul’s son, Ish-bosheth to be king, and there was civil war for two years.

After a Saul’s death, it was time for David to step into office, but he was blocked from fully taking the reigns of power.

There is a contrast between David walking into his calling and Abner promoting Ish-bosheth to office.

David was not recognized, as king, by theses men.

We know, from reading the Bible, that David was God’s chosen one.

But all the people did not know it at the time.

Saul died, but persons with power refused to let it go, and hatched a plan to keep or regain power.

There was an immediate coup or insurrection against David.

This is sad and strangely encouraging.

Because we know how the story ends.

The rebels or the resistance did not have to die, but they chose a suicidal mission of treason and sedition and brought death upon themselves.

Why did they do it? What motivated them?

Everyone is ambitious and we are all competitive.

But, certain people are so ambitious and competitive that they employ immoral, unethical, anti-social, deviant, or psychopathic ways with others, to get what they want.

There are bad people who will use you, by offering you a promotion or position, for their own selfish plan, that ends up destroying you.

When the offer is made, pray about it, seek godly counsel, and consider, “Is this God’s will?”

We carry shame when we have not been loved or nurtured.

Shamed people have low self-esteem and feel bad about or hate themselves.

It may be mostly subconscious.

Shame is from something that was wrong or hurtful that was not taken responsibility or accountability for.

The trauma of shame binds a person into being false, fake, or inauthentic.

They play a role to become accepted.

They have no visible core self, because it was damaged and has been covered over.

They may end up doing immoral, unethical, devious, diabolical, evil things, without a blush.

All people who carry shame from abuse or neglect do not end up doing these things, but are at-risk.

The opposite of shame is honor.